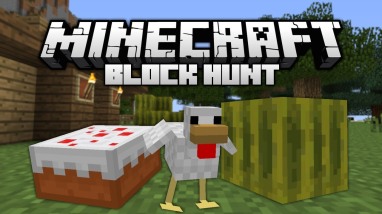 Hello fellow Minecraftians. Today I would like to tell you about the Minecraft mini-game Block Hunt or Prop Hunt. It is pretty much hide-and-seek. There are about 30 people in a game. About two-thirds of them are disguised as blocks and have to hide. The other third of the people are trying to hunt down and kill the hiders. When you are a hunter, you usually get a sword, a bow, and armor. On some servers the hiders get a sword and bow too. The hiders have the huge advantage of being able to transform into any block or mob. The hunters cannot tell a normal block from a person disguised as a block. This means the hunters have to watch for the hiders to move, and they try to hit random blocks hoping the block they are hitting is a hider. The aim of the game for the hiders is to stay hidden for a certain amount of time, which differs by what server your are playing on. If you are a hider and you die, then you become a hunter. The aim of the game for the hunters is to hunt down and kill all of the hiders. If you die and you are a hunter, then you are out of the game. If you are hiding, and the time runs out, you and all other hiders still alive win the game. However, if the hunters are able to kill all of the hiders, then the hunters win.

I have not played this game much but would like to in the future. As you can see, it is better to become a hider because if you die while being a hider then you become a hunter. This gives you the chance to try both roles.

Here is the view of a hider:

Experience the most wonderful things in Online Minecraft Games

Why listen to people who have no experience with servers tell you about servers?

A generals guide to minecraft

I will give you tips and tricks to minecraft

Expanding "The Galaxy Not So Far, Far Away" Since 2012

To Game For Life

After 50 years, clearly gaming is lifelong

My blog will cover my daily life in Uganda

This is a blog about anything pertaining to Lego (Reviews, Announcements, Set info, Lego Creation Ideas, and more)